This website is dedicated to information about the genetic heart condition Hypertrophic Cardiomyopathy which is generally referred to as HCM.  It’s a lot easier to use the abbreviation because the full name is quite a mouthful!  This infographic from Mayo Clinic provides a good overview of HCM.

Or, you can watch this video from Dr. Steve Ommen of Mayo Clinic’s HCM Center to help you understand some of the basics about HCM described below.

HCM is a very common condition, and, according to a 2015 article, may affect as many as 1 in 200 people.  However, many do not know that they have the disease and are often undiagnosed or have instead been misdiagnosed with other conditions.

The Heart in HCM:

In HCM, the heart is thicker than it should be. While you might think that the heart, being a muscle, would be stronger and therefore better when it is bigger, in this case, being bigger is not such a good thing.

Below is picture of a normal heart on the left and a heart with HCM on the right. The hallmark of HCM is the thickened ventricular septum that you see on the right. 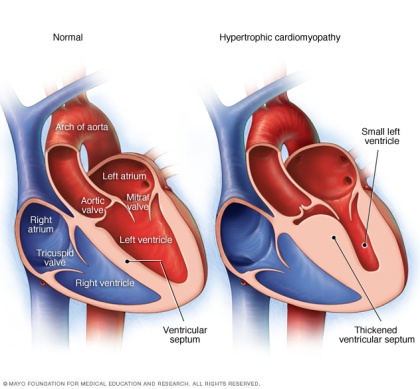 Another hallmark of the heart of a person with HCM is called “myocardial disarray” which is essentially an abnormal, chaotic arrangement of the cells in the heart. This misalignment of cells can be responsible for arrhythmias which can sometimes be very dangerous. 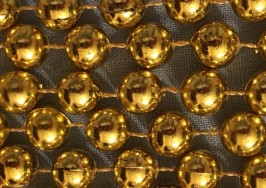 This is an illustration of how normal heart cells might look under a microscope.  See how the beads are arranged in an orderly and regular fashion? 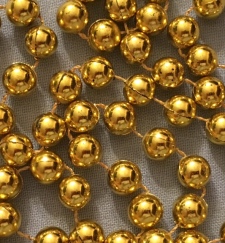 This is an illustration of how HCM cells might look under a microscope.  Notice how, in contrast to the above picture, the beads are now arranged in a chaotic fashion and are lying in no particular pattern or order.

HCM is an autosomal dominant genetic condition.  This means that an affected individual has a 50% chance of passing along the gene which causes the condition to their children.  Hence, once an individual has been diagnosed with HCM, all first degree family members (i.e. parents, siblings, and children) should be tested for HCM, as they may also carry a gene for the condition. Often, once a patient has been diagnosed with HCM, it is found that other family members carry the gene and/or have the condition as well.  This article from the National Institute of Health provides a good summary of the genetic heritability of HCM.

Today, genetic testing is available as a tool to help identify family members at risk for HCM.  This type of testing involves having an affected family member submit a blood or saliva sample to one of the commercially available genetic testing companies for analysis.  Several companies in the U.S. currently provide this service.  Tests must be ordered by a physician and/or a genetic counselor who will review the results of the testing with the patient.

Just because a person carries a gene for HCM does not automatically mean that they have overt manifestations of the disease.  However, carrying the gene does mean that the person will probably develop at least some mild characteristics of the disease during his or her lifetime.

It is important to recognize that HCM is a disease with extreme variability. An affected individual may fall anywhere on the spectrum, which, on one extreme may be a very mild form of the disease which does not in any way impact lifestyle, while on the other end of the spectrum, it can cause severe symptoms which, in a minority of cases, necessitates heart transplant.

It is worth noting that some patients will be the first in their family to be found to have HCM, and  sometimes genetic testing results will prove to be inconclusive because not all HCM genes have been identified yet.  However, more and more HCM causative genes are being identified so genetic testing continues to get better and better.

Genetic testing has also been proven to help find the cause of death when a sudden death occurs in a young person with no apparent cause.  These “genetic autopsies” can be very helpful in subsequently identifying other family members who may also be at risk.

If a family member is identified as a HCM genetic carrier, he or she should begin a screening regimen with a cardiologist who, using the protocol described in the text box below, will closely watch the carrier for signs of HCM.  This way, the carrier will receive appropriate treatment right away should he or she receive a diagnosis.

The recommended guidelines for screening are found in the text box immediately following the next section. 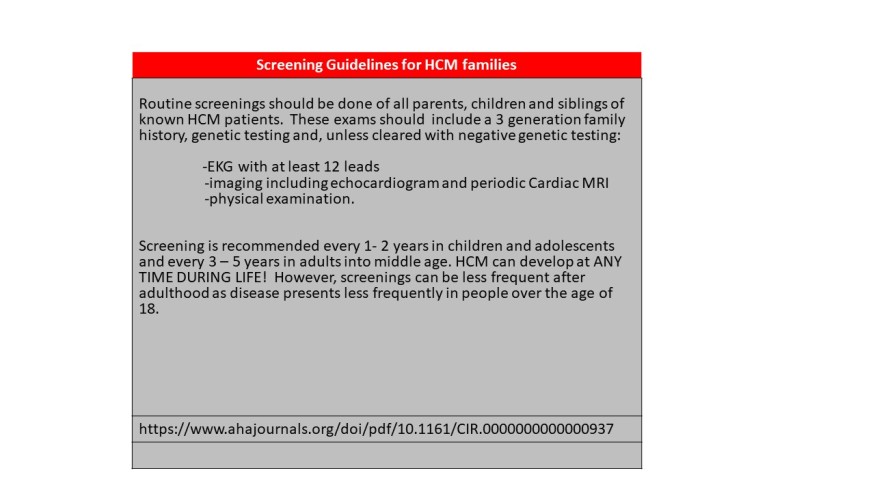 Tests which can determine whether an individual has HCM may include:

According to the Mayo Clinic, common symptoms of HCM include:

When treating HCM, doctors have two goals in mind: relieving symptoms of the disease, if any, and preventing sudden death of patients determined to be at high risk. The type of treatment will vary depending on your symptoms, and may also change over time.

There are several different treatments for HCM which may be used alone, or in combination with other approaches. The following is a summary of these treatments. 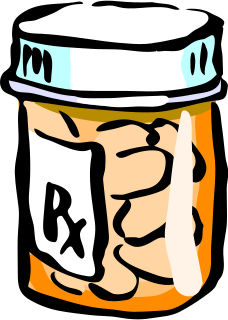 Medication is almost always the first line treatment for HCM.  Often it takes a bit of trial and error to find the right medication or combination of medications for any particular individual.

Common medications used for HCM include:

As of right now, there have been no medications specifically recognized by the FDA to treat HCM. The use of the medications listed above is what is known as “off label,” meaning that these medications have been FDA approved to treat other conditions, and are currently in use to treat HCM patients because it was thought that their properties would also be useful for the treatment of HCM.

In the last few years that has all started to change and for the first time in the history of HCM, there are medications in clinical trials seeking FDA approval for the specific treatment of HCM.

Stay tuned to HCM Beat as we are closely following these developments on our News of Interest page! 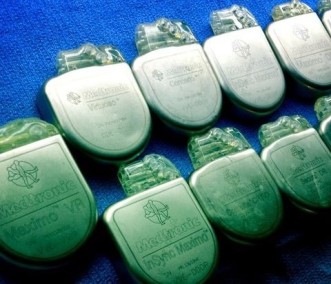 If a patient is found to be at high risk of sudden death, doctors will likely recommend the implantation of an ICD.  This is basically an “extra tricked out” pacemaker that has the added ability to give the heart an electric jolt to restart it if it stops or goes into a dangerous rhythm. This works the same way as a shock given by paddles just like you might have seen on television medical shows. You can think of a shock from a defibrillator a bit like turning off your computer to reboot when it is not working well.  Sometimes a big jolt of energy is what the heart needs in order to resume a normal rhythm when things get out of whack and we are lucky to have the technology around to make that happen.

It is important to note that usually ICDs are not implanted with the purpose of improving symptoms. Hence, if an ICD is recommended for you, you will likely still need medication or other treatment. The ICD can, however, prevent sudden death by terminating any lethal heart rhythms.

There are several factors which are listed in the text box below which are used in determining which patients will require an ICD.  It is important to remember, however, that without the benefit of a crystal ball, doctors cannot predict with certainty which patients will be saved by having the device, and which patients will have a device that goes unused.  And, doctors must balance the potential benefit of the ICD with the possibility of harm which might result from the surgical implantation of a man-made machine which may malfunction and cause later issues for the patient. 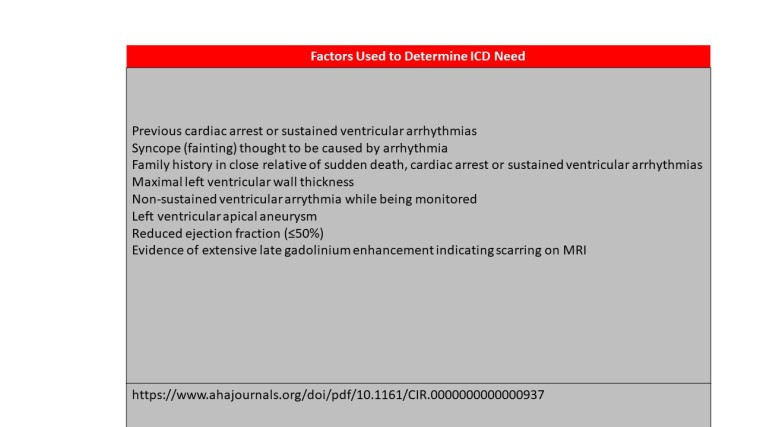 For this reason, patients must work hand-in-hand with their doctors to carefully balance need vs. potential harm in order to ensure that devices are prescribed appropriately.

Myectomy and ASA are currently the two commonly used procedures for septal reduction and there is at least one other procedure currently being studied as a potentially viable alternative.

These techniques work by removing obstructive muscle tissue from the outflow tract of the left ventricle of the heart in order to restore better blood flow and alleviate symptoms.

This is an open heart surgical procedure in which the surgeon physically cuts away a portion of the muscle, in order to restore better blood flow.

Considered to be the “Gold Standard” in septal reduction, this procedure has been performed on HCM patients for more than 50 years.

This is a catheter-based procedure in which a small portion of the thickened heart muscle is destroyed by injecting alcohol through the catheter into the artery supplying blood to the thickened ventricular septum.  This procedure is only available to certain patients whose obstruction is located in a very specific part of the septum and who have appropriate blood vessels which supply the area.

Alcohol septal ablation is a relatively new procedure as compared to myectomy, having been in use for just over 20 years.

Comparing Myectomy to ASA:  Not everyone is a candidate for both procedures, and there has been great discussion over which technique is superior.

This 2014 article from the American Heart Association’s Circulation concluded that both techniques have their place, but that myectomy was the preferable procedure for those patients who are otherwise healthy enough to undergo open heart surgery.

The 2011 ACCF/AHA Guidelines for the Management of HCM state that ASA should not be used in patients who are also in need of valve repair or who need of bypass surgery, since these additional issues could be addressed at the same time as myectomy but are not treatable by ASA.

And, myectomy is the procedure of choice for young people.  In fact, the guidelines specify that ASA should not be used in patients younger than 21 years of age, and are discouraged in adults younger than 40 if myectomy is a viable alternative. 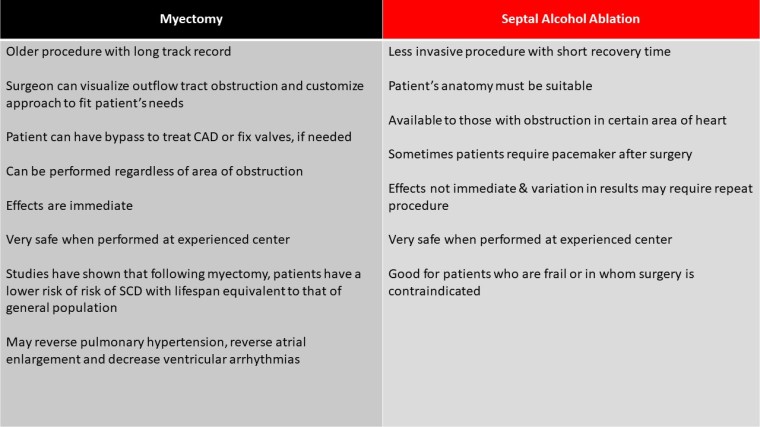 High intensity competitive sports are generally inadvisable for those with HCM, as are sports that incorporate burst exertion, like running, basketball, tennis, etc.

However, aerobic exercise done under controlled conditions can be acceptable, depending on individual condition and advice from one’s physician.

See this article from Science Direct for more details.

**Whenever exercising, it is important to avoid dehydration and to use extreme caution in hot, humid environments.**